“+me” is the world’s first “Transitional Wearable Companion (TWC)” experimental prototype, designed for the therapy of children with Autism Spectrum Disorders -ASDs- and more generally for Pervasive Developmental Disorders PDD. Its purpose is to support, facilitate and foster the development of basic social skills, as eye contact, joint attention, request of engagement, social referencing. It is based on a soft, animal-shaped robot, which can potentially motivate the children to interact with a caregiver, during the therapeutic activities.

The current prototype looks like a soft panda, with big eyes and four paws. Its shape is designed to arise emotional attachment, through a reassuring, comforting, physical contact. When +me is touched or caressed by the child, it responds emitting coloured lights and sounds, according to the site of contact. These are generally very rewarding stimuli for children, and are able to draw their attention.

The concept behind +me was developed within the European project "Goal-based Open-ended Autonomous Robots GOAL-Robots (grant agreement No. 713010) 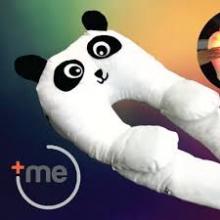