How can blind people see a painting?

Perceiving a painting through touching and hearing: this was the aim of an ISTC project, which realized a working prototype to allow a blind person to "see", exploiting the phenomenon of synesthesia.

3D forms, resin, music. These are the main ingredients to create a painting not to be seen but to be felt. Francesco Antinucci developed this idea in order to create a new art for blind people, combining the right shapes, materials and sounds.

The central, innovative idea of his approach lies in the use of synesthesia, a cognitive phenomenon thereby a perception in one sense modality spontaneously evokes a corresponding perception in another sense modality. In this case, the hearing of a sound produces the perception of a color. The basic correspondence was established by taking the three parameters defining each possible color – hue, luminosity, saturation – and assigning to each of them a corresponding parameter in the musical field: timbre, pitch, volume, respectively. The next step was to implement this into a working physical device: two advanced commercial software (Edirol Orchestral and Steinberg V-Stack) were run with a specific program, able to analyze the image of the painting into the three color component pixel-by-pixel and to convert each of these value into the corresponding musical sound in real time.

After that, a 3D version of the painting was realized in a 1:1 scale, first in plastiline, then in silicon rubber and eventually in epoxy resin, highly resistant to touch. The 3D painting was provided with a magnetic field three-dimensional miniaturized tracking device, to be fastened on the blind person's finger. With this last step, Raphael's The Lady with the unicorn was ready to be seen with ears and hands. 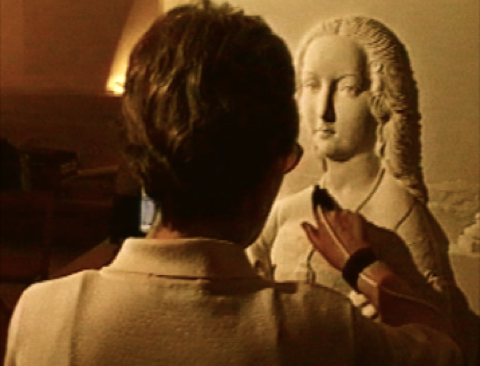