Do we think before acting or do we act before thinking?

A responsible person thinks before acting, says conventional wisdom. But is it true? At ISTC the Goal-Oriented Agents Laboratory (GOAL) explores the connection between physical and cognitive skills, showing that thought doesn’t always come first.

The origin of advanced cognitive abilities (such as planning, reasoning, language understanding) has always been investigated in psychology and more recently in neuroscience. At ISTC the Goal-Oriented Agents Laboratory (GOAL) is trying to set up strong connections between physical skills and advanced cognitive abilities. The group is thus contributing to the development of a novel approach, the embodied cognition paradigm. The paradigm aims at understanding the role of the body in cognition starting from some crucial questions: what is the influence of sensory and motor processes on higher-level cognitive abilities? Are they separated, as supposed in early cognitive science theories, or deeply interconnected? How could living organisms develop cognitive abilities on top of physical skills and the execution of bodily movements?

At ISTC the key hypothesis GOAL pursues is that primitive action control architectures of early living organisms provided the foundations for advanced cognitive abilities, such as planning, reasoning and mindreading through a reuse of predictive mechanisms in increasingly sophisticated ways.

In accordance with recent evidence in neuroscience and psychology, the Goal-Oriented Agents Laboratory claims that anticipatory and simulative mechanisms determined the first form of representational content. These anticipatory skills arose during evolution for action control and not for cognition, but their use led to increasingly sophisticated cognitive abilities. In fact the need to predict the outcomes of bodily actions spurred the development of complex cognitive skills. This also explains why cognitive tasks, such as linguistic or reasoning tasks, still retain sensorimotor "signatures" and recruit sensory and motor processes in the brain.

The body has therefore a fundamental role in cognition, which is regulated by anticipatory mechanisms. Considered this way, the embodied paradigm can probably bridge the gap between physical skills and high-level cognitive capabilities. Showing that humans both thing before acting and act before thinking. 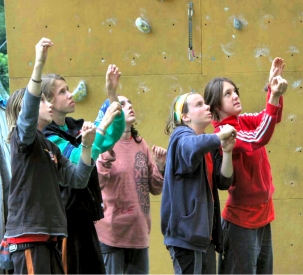