The IM-TWIN project, a Pathfinder pilot project funded by the European Innovation Council,  aims to transfer some of the outcomes of the previous EU FET-OPEN GOAL-Robots project toward market exploitation. The basic-research GOAL-Robots project aimed to study how intrinsic motivations (“curiosity”) drive exploration and learning in children, and how such processes can be used to develop innovative autonomous robots. This led to conceive the idea that intrinsic motivations can be used to build engaging interactive robots usable for the treatment of children with developmental disorders, in particular within the Autism Spectrum Disorder (ASD). ASD is a condition with dramatic importance for the well-being of society as it affects about 1 out of 10 newborns in developed countries. We thus developed a “wearable companion robot”, usable for the treatment and daily support of ASD, called PlusMe, now at the stage of the prototype.

The IM-TWIN project has two sets of objectives. The first is to develop a highly-modular system pivoting on the PlusMe, called the IM-TWIN, addressing the needs of the market segment involving ASD therapy centers and, potentially, families with ASD children: this involves endowing the PlusMe with intelligent behaviour, equipping it with additional embedded biosensors and cameras for detecting the child’s affective/emotional state, and integrating all components as a whole IoT system.

The second set of objectives aims to validate the device and its components with target stakeholders, and to carry out a number of activities directed to advance the system components to a higher Technological Readiness Level (TRL7 for the PlusMe; TRL5 for the embedded biosensors): this involves identifying the target groups, analysing ASD-related markets, refining and implementing an effective IPR strategy, planning the steps for individual and collective exploitation, and finally evaluating the creation of a startup for the exploitation of the IM-TWIN system and its components. IM-TWIN will also foster the development of a lively high-tech research and application ecosystem. 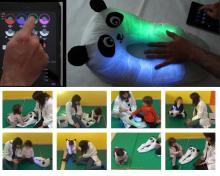